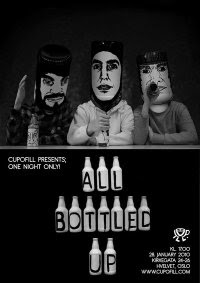 A Study in the relationship between exterior and content.
– Is it more important to be politically correct or simply to have a good time?-

In these past few years the «Designer toy» phenomenon has spread across the globe, it has even reached far away destinations such as tiny little Norway.
This has become somewhat of a trend, and has received massive hype. We think that simply decorating mass produced, highly priced toys are still just toys. It has in some way or another outplayed its part. If one continues going about the same thing over and over again, it eventually takes on a monotonous nature.

We wish to break out of the monotony by criticizing, and still yet appreciate the finer aspects of it.
The challenge in Illustrating on something three-dimesional is something we find fascinating and challenging.
To say the least, this is a challenge we are wanting and ready to take on.

Most importantly we feel a strong need to combine form and expression. The challenge lies in that of by combining our message with Illustration will create a synergy-effect. At the same time we want to criticize society.
That is why our chosen canvas is none other than a little, brown, 33 centiliter, standard Norwegian glass beer-bottle.
It is brown in more than one sense. Every Norwegian has some kind of a relationship with both its shape and content. more than it is a bottle in itself it has become the Norwegian symbol of the consumption of alcoholic beverages. In this is where our fascination lies; Where do you put the line between marketing and illustration?
Illustration in itself is often of the nature that it is created with the intention to sell to a market.
Norwegian legislation states that Advertising for alcoholic beverages is strictly forbidden. The question that spring to mind is that of where the boundaries of art and marketing go. We want to express ourself individually, and in no way do we have an agenda to market stimulating substances. At the same time, we want to put forth questions concerning the rules and norms of society, that of what´s generally accepted.

In itself, the Object is not anything else but a simple bottle. It is something cold, something mass-produced and lifeless. We wish to give these a new life, to be reborn as something else, something new. We want to create characters that breathe life into them and gives them a soul of their own. the Illustration on it´s own does very little other than decorating, it is to the mind of the beholder that we want to communicate. That is where they will appear as individuals rather than inanimate objects. That is the essence of what we want to explore. People in general take themselves a little too seriously, what do you have if you don´t have fantasy?

No matter what, it is most important is to have fun, and appreciate all the good things life has to offer.